Congratulations to the 2009 Arts Awards Winners.

The Awards Ceremony took place at the Centre In The Square on . 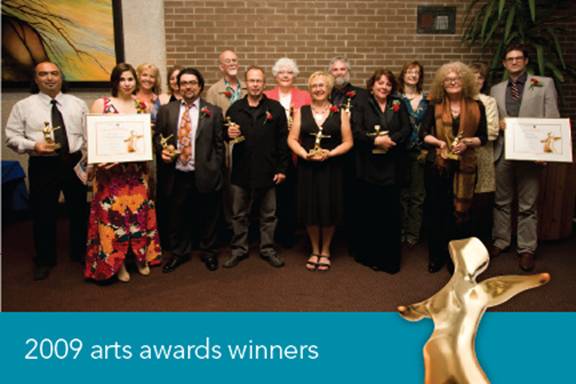 Call it theatre without a theatre.

Embracing the Shakespearean notion that "All the world's a stage," a group of actors will soon hit the streets of downtown for a showcase of site-specific plays.

It's the fifth installment of the ever-growing Asphalt Jungle Shorts series, an interactive theatrical event that requires the audience to meander from one non-stage to the next.

Starting Thursday, the eight-night festival will see a dozen actors scattered throughout downtown sites stage 15 short plays. Some plays are barely a minute long; the biggest of the bunch is only 13 minutes.

The audience will know almost nothing about the sites or the plays in advance, except that they'll meet at the Kava Bean Commons shortly before showtime, ideally in comfy footwear. The element of surprise is a key component in the success of Asphalt Jungle Shorts. A play could suddenly begin unfolding on a fire escape, down a back alley, in a storefront window or right beside you.

Occasionally, the city itself provides the drama, such as when a pair of police officers arrested a belligerent man along the walking route of Asphalt Jungle Shorts. The audience assumed it was a play -- and they were quite enjoying its gritty realism -- until they were ushered away.

"Not only (does the) city become a set, but it becomes a character," says Paddy Gillard-Bentley, who founded Asphalt Jungle Shorts nearly four years ago. "The lines of reality and imagination are blurred."

Gillard-Bentley won't disclose the sites chosen for this year's plays, except for one: the clock tower in Victoria Park. Israeli playwright Yohanan Kaldi penned his play Towering Passion specifically to be performed there.

Other sites are anybody's guess. They could be anywhere. One play during a previous Asphalt Jungle Shorts unfolded a storey beneath street level as the audience watched from directly above through a large metal sidewalk grate.

To keep audiences guessing throughout the evening, programs are only handed out at the end of each show.

Starts at Kava Bean Commons, (across from the bus station)

Tickets are $15, and audiences are asked to arrive 15 minutes prior to show time. For reservations and more information, visit www.flushink.net or call

ASPHALT JUNGLE TAKES IT TO THE STREETS

The cast of Asphalt Jungle Shorts uses the textures and venues of downtown to offer a theatrical surprise.

Where can you go to watch 15 unique plays all in one night?

What plays can you see?

When can you see them?

OK, that part can be revealed.

Starting Wednesday and continuing through Sept. 22, you can go . . . somewhere . . . in downtown to enjoy an unusual night of theatre.

The secrecy is an important part of the show, Asphalt Jungle Shorts.

The experimental theatre project, now in its third production since last September, stages short plays at secret locations around downtown .

The audience walks from one unusual venue to the next, thus turning the entire downtown into an impromptu theatrical space.

To give away the plays and their locations would spoil some of the fun.

What artistic director Paddy Gillard-Bentley will divulge, however, is that the upcoming incarnation of Asphalt Jungle Shorts is the most ambitious and surprising yet.

"It's such a different kind of experience," she says.

"I want to make it the best I can, and the way I can do that is keeping the mystery about it. I don't even tell my closest friends what's going to happen."

Half the time, Gillard-Bentley herself doesn't know what will happen. For instance, last year, audience members assumed (incorrectly) that a police takedown was all part of the show.

In a sense, downtown itself becomes a character in the short plays, and the actors must go with the flow when downtown steals a scene.

The plays of have been staged in back alleys, dumpsters, closed shops, hotels and City Hall.

This time, six directors and a cast of 12 will perform the 15 new plays, which Bentley narrowed down from nearly 300 submissions from playwrights around the world.

Among the directors are members of Lost & Found Theatre Kathleen Sheehy, Gary Kirkham and Richard Quensel.

The audience will be guided from one "stage" to the next by crew members, and Gillard-Bentley hopes it will help people appreciate downtown Kitchener.

"I love downtown, and I understand there's a need to reacquaint people with it."

For tickets and information on where to start the theatrical adventure, call .

After about 40 or 50 years to get it right, The Mackenzie King Square may finally be receiving its makeover.

This is the "take-off" season: Over the last couple of weeks there have been various launch events in and around the square (also referred to as the civic district) in that have some interesting connections with one another.

On Sept. 6 the spotlight was on the district itself: This was the first public presentation of a plan that proposes a major transformation of the block that contains the greatest concentration of cultural and civic institutions in the region: The Mackenzie King Square which is the area bounded by Queen, Ellen, Frederick and Weber streets.

It was a fairly low-key affair, with just a few invited guests -- some folks from the neighbourhood, along with people associated with the various cultural institutions involved, like the Kitchener Public Library, Centre in the Square, Registry Theatre, Kitchener-Waterloo Symphony, Grand Philharmonic Choir, and Kitchener-Waterloo Art Gallery.

As Centre in the Square general manager Jamie Grant explained in his remarks, back in the 1950s and '60s there was a grand, integrated plan for the area. But that vision was never fully realized.

The proposal is to finish what was started 30, 40 and 50 years ago. The first step in the planning process is an open, public invitation to "imagine the possibilities."

Go to the Kitchener Public Library, KWAG, Centre in the Square or City of website, and you'll find links to background information, an online survey and a brief introductory video.

That video is a link to another event that took place the following day: the official public launch of a new local media project called CAFKA.TV.

The "imagine the possibilities" trailer is a CAFKA.TV production.

CAFKA.TV is the brainchild of the creative minds behind the Contemporary Art Forum, Kitchener and Area, the region's biannual contemporary visual arts celebration.

Part of the purpose is to spread the word near and far about CAFKA.07: Haptic, which will have an official launch of its own on Thursday.

The intention is also to supplement the limited coverage of local, national and international contemporary art in the mainstream media with something fresh and vital. But above all, if you click on CAFKA.TV you'll see the aim is to have fun.

There are some interesting synergies: CAFKA, building on a long-standing relationship with KWAG, now involved with the entire civic district.

These kinds of synergies were even more evident at an after-work season launch reception at The Registry Theatre last Thursday.

Almost all of the other civic district cultural organizations are involved in some way: The KW Symphony, for instance, is part of a Classics at The Registry series. KWS trumpeter Larry Larsen spoke about playing improvisational jazz with references to paintings provided by KWAG behind him on the stage.

Through The Registry, the connections extend to some of our most dynamic theatre arts ensembles: Lost & Found Theatre (which will be presenting Some Assembly Required on Oct. 25 through Nov. 3); the MT Space (Pinteresque/Exit Strategy, Nov. 15-24); Poor Tom Productions (The Anorak, Nov. 28-Dec. 1). The , which presents a Folk Night at The Registry series, and the K-W Children's Drama Workshop (Nuncrackers, Dec 12-16) can also be mentioned in this context.

It felt like a real celebration; there were very good energies in the room.

By all accounts, the energy was also flowing at the gala launch of a new era for the KW Symphony the following evening, the first regular season concert with conductor Edwin Outwater. I couldn't make it to that one, so I'm relying the Phil Bast's video coverage on www.therecord.com and Sandra Deefholts' review in Saturday's paper.

What I did do, though, is catch Asphalt Jungle Shorts III -- another presentation of a sequence of short plays -- 17 of them altogether -- performed on-site in various downtown locations.

The reference may be somewhat out of place here, although there are people in the current production connected to almost all the theatre groups mentioned above. But there is no civic district location, and the stage is the very antithesis of the world-class concert hall facilities at Centre in the Square: They are literally "taking it to the streets" here.

The main reason I'm mentioning it is that the run continues tomorrow through Saturday, so there are four more opportunities to see it, and this is my only chance to say "don't miss it."

The box office is in the K-W Book Store (). The show starts at ; for tickets ($15/$5 eyeGO) call or e-mail flush-ink@skyedragon.com. For more information, visit www.flushink.net.

Martin DeGroot is executive director of the Regional Arts Council. He comments on arts and culture Tuesdays in The Record. You can reach him by e-mail at mdg@golden.net. 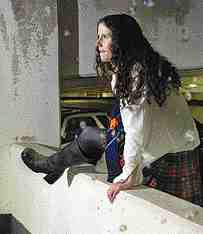 The Orange Whistle, one of

the plays in Asphalt Jungle Shorts.

Downtown's a stage for 17 quirky plays