PICTURES TAKEN DURING THE PRODUCTION

It was our first show, and we did not take enough pictures.  We’ve leaned. 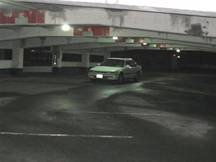 Parking Garage for The Orange Whistle…where it all started. 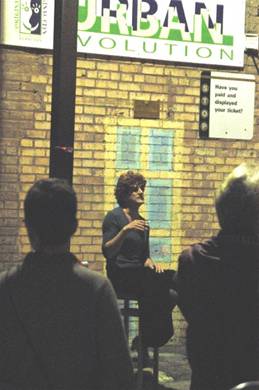 Hard to see, but the City Hall for Howard and the Snake. 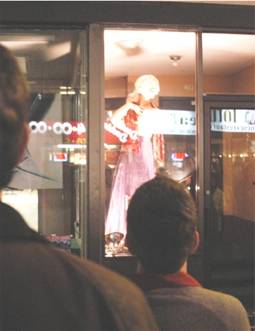 A women changing the clothes of a mannequin in the window,

covering her modesty when she sees people watching her, had the audience doubled-over in the street. 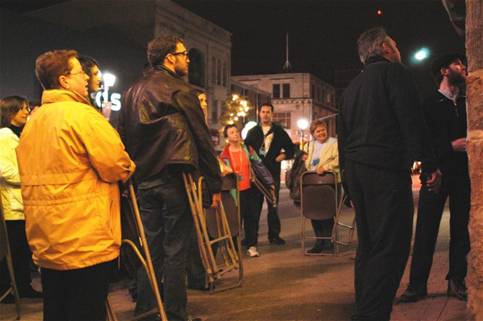 The audience watching the Mannequin piece. 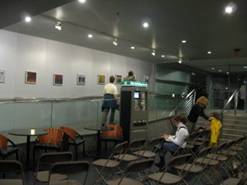 Justice of the Peace, by Linda Eisenstein – outside the chapel in the City Hall. 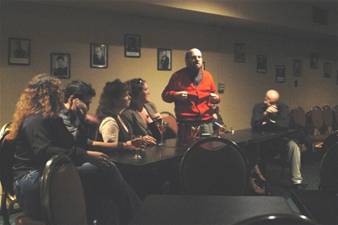 OH MY GOD!  I’m wearing the red shirt of doom!  About Surreal Life….the last piece of the night.

The Play is the Thing!

BETH AT 50 – Behind The Mayfair Hotel

JUSTICE OF THE PEACE – City Hall

«HOWARD AND THE SNAKE – City Hall

MAN OF MY DREAMS – The Mayfair Hotel

Theatre like you never have!  Is that woman beside you part of the show or just strange?

Are those policemen actors who are arresting the young man?   Nope.

In our past events, some plays have been performed in store windows, garbage dumpsters, back alleys and

thirty feet below street level through a grate in the sidewalk. The line between reality and imagination becomes blurred when you aren't sure what is a play, and what is the usual natural theatre of downtown Kitchener.

Who was in the show

Who wrote the show

Who directed the show

Who made the show happen

WAS BROUGTH TO YOU BY... 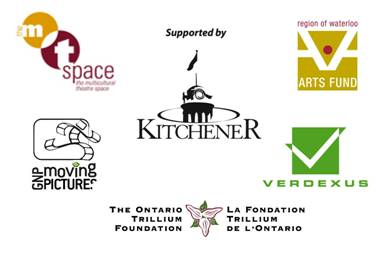 Thanks to our sponsors and collaborators…